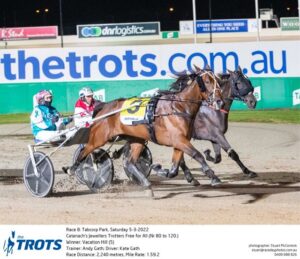 One of the most promising trotters racing in Australia is Vacation Hill, bred and raced in New Zealand and now trained by Andy Gath after leaving the West Melton barn of Keven Townlwy. A five-year-old, Vacation Hill has had six starts in Victoria for three wins – all at Melton – and a second.

Vacation Hill was bred by Canterbury horseman Bruce Hutton, who, along with Melbourne businessman Michael Taranto, bought her grand-dam Sunny Lane and put her in foal to Dream Vacation.

The result of the mating was Vacanza, a useful trotter who won five races and took a record of 1:59.8.

Put to the stud, Vacanza produced Vacation Hill to the cover of Muscle Hill as her first foal.

“I put her in the yearling sale but she didn’t get a bid,” Hutton said, “so I brought her home and sold her through Kevin Townley to Nick James a week later.”

Vacation Hill began her career as a three-year-old, winning three races including the Group 2 $50,000 NZ Trotting Oaks at Addington and was five times placed from 13 starts.

At four she won a further three races at Addington and finished a creditable third to Bolt For Brilliance and Muscle Mountain in the Group 3 NZ Trotting Classic.

Vacation Hill has a background of trotting blood second to none. Her sire, Muscle Hill, has left the great Australian trotting mare Dance Craze and top NZ trotters in Bolt For Brilliance, Tickle Me Pink and Five Wise Men.

Her dam, Vacanza, was by Dream Vacation from Sunny Lane, by Lindy Lane from a fine racemare and dual Group winner in Sunny Action, by Sundon from the American-bred mare All Action Gal, who established a great winning line for Roydon Lodge stud.

All Action Gal left Group winning trotters in Australia in All Action Sun and Solar Active and others in All Sundon, a big winner in America, Action Game and Roydon Speed, and was the ancestress of Southern Alps, All Action Man, All Royal Gal, Action Cosmos and Sunset Peak, all trotters of some worth.

All Action Gal’s dam Roydon Gal was the dam of the world champion Arndon, the sire of the great Sundon, the premier trotting sire in NZ for 16 consecutive seasons and in Australia for 13 years.